Is intelligence in the genes or can it be developed ? IQ tests may be passé but abilities do matter and undoubtedly talents have to identified and nurtured !

The first IQ test was invented in 1905 by Alfred Binet and since then the prevalent view has been that intelligence is an ability one is born.  The general view was that genes determined abilities / intelligence and that environment has only a small role to play in nurturing talent.  Binet himself deplored these views and was quoted as follows.

Some philosophers seem to have given their moral approval to these deplorable verdicts that affirm that the intelligence of an individual is a fixed quantity, a quantity that cannot be augmented. We must protest and react against this brutal pessimism; we will try to demonstrate that it is founded on nothing.—    Alfred Binet (1909)

The debate of nature vs nurture and gene vs environment has been going on for decades.  Modern Psychological Science vindicates Binet’s assertion and holds that abilities are malleable and that practice, commitment and effort and psychological strengths such as mental skills, persistence etc play an important role in talent development.

The theory of multiple intelligences was proposed by Harvard psychologist Howard Gardner because traditional psychometric views of intelligence were too limited. Gardner in his book Frames of Mind: The Theory of Multiple Intelligences, (published in 1983) suggested that everybody has different kinds of “intelligences.” Gardner identified that there are eight different intelligences such as musical, athletic, interpersonal, spatial-visual and linguistic intelligences.

Talent Development and Giftedness – From abilities to competence to expertise and eminence:

A comprehensive mega model for talent development has been presented by Subotnik et al (2011) which covers various domains like sports, music, academics etc and across various stages like childhood, adolescene and adulthood.  This model takes into account talent development models of the illustrious scholars like Bloom, Renzulli, Sternberg and others.

The monumental work by Subotnik et al articulates a unified vision of giftedness from the perspective of psychological science. It gives a upto date definition of giftedness which manifests in the early stages as potential and later as achievements and eventually as eminence. The framework for talent development has been developed on the following principles:

•  domains of talent have varying developmental trajectories, opportunities need to be provided to young people and taken by them as well,

•    eminence is the aspired outcome of giftedness.

The model also outlays the talent-development process by emphasizing the several transitions whereby abilities are developed into competencies, competencies into expertise, and expertise into eminence.  These transitions are distinguished by levels of creativity beginning initially with “little-c” creativity (independent thinking, creation of novel projects), and ultimately the “big-C” creativity required for eminence. These transitions involve shifting emphasis from “person” (creative approach and attitude”) to “process” (acquiring process skills and mind-sets) to “product” (creation of intellectual, aesthetic, or practical products or performances).

Each stage in the talent-development process is also characterized by different strategies and goals of instruction; initially, to engage young people in a topic or domain (“falling in love”), then helping the individual develop the needed skills, knowledge, and values (“teaching for technique”), and finally helping the talented individual develop their own unique niche, style, method, or area of application (“mentoring for personalized niche”).

Continuous effort is critical, as research has shown that it takes 10,000 hours of continual study or practice to reach levels of expertise in most domains. Talent-development activities should be provided to all children as early as possible.  So, while abilities matter (as per the traditional view), the modern psychological scientific view asserts that talents have to identified early enough and developed. 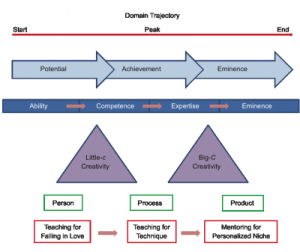